Preparing for fall by brewing a summertime Märzen.

Experimenting with mixing yeasts in a Raspberry Wheat.

The other day, I was preparing to brew a long overdue Raspberry Wheat. When I checked the yeast I had on hand, I noticed that the Wyeast Labs German Wheat was eight months old. This seemed like it might be problematic. So I went to my local homebrew shop to try to pick up another, fresher yeast.

Unfortunately, the only yeast they had in stock was Wyeast's Bavarian Wheat. It, too, was about seven months old. Bavaria is a section of Germany; how different can they be, right? So I decided to try an experiment. Since both yeasts are old, I thought I'd pitch them together and see what happens. I made a large yeast starter the night before and did exactly that.

The yeast turned out to be very active. If my gravity readings are accurate, the Raspberry Wheat should turn be more than 5 percent ABV, instead of 4.5. As for the taste? It'll be a few weeks until I can tell. I've got my fingers crossed it turns out well.

Back in the saddle

The key to brewing in the heat of the summertime? Start at 6 a.m.

Inaugurating my brand new nitro setup by tapping the keg of sweet stout.

Hoping to bring an early start to spring by brewing a saison in February.

and weighing out the three ounces of East Kent Goldings, Saaz and Styrian Goldings for this saison.

Another year, another beer

A look back at the most ambitious year of homebrewing yet.

After a few years of brewing infrequently, I began 2016 with a bold goal, to brew a batch of beer every month of the year. Remarkably, and somewhat unexpectedly, I managed to meet my goal. In the process, I learned quite a bit about how to brew faster and better, or at least be more consistent about hitting the original gravity a recipe calls for.

I also dabbled in growing hops for the first time, planting Sterling, Cascade and Centennial rhizomes. Sadly, only the Centennial hops took hold. Likely I put the others in bad soil, bad light, or, in one case, planted it too late in the season. The Centennial vines grew like mad. I wasn't expecting many cones this first year, so I was happy to see how many healthy and fragrant ones popped up.

Then I screwed up and forgot to harvest the hops. By the time it occurred to me, in mid-September, the hops were dry and browning, past their prime. Next year, I'll try to grab them up earlier.

Finally, on Dec. 31, I installed a fourth tap in my kegerator, a forward sealing faucet that won't get stuck shut.

But back to the matter at hand. What became of all that brewing in 2016? Here's a brief overview of each batch I made and how it turned out. In retrospect, the tasting notes, which I jot down on my phone, don't make a whole lot of sense much of the time, but I'll share them nonetheless.

Tasting notes: Cloudy and strawlike hue. Smells a bit sour of tannins. Bitter lager taste with a tad of astringent. Hops on the aftertaste. Almost a grapefruit sour to it. Way too hoppy for my taste. A bit of a letdown

A month or so later: Pilsner mellowed well. Still bitter and cloudier than I wanted, but the taste has improved with time. Not too bad, especially on a hot day.

Tasting notes: Light, golden amber hue. Wheat and sweet with a taste of raspberry that's not overpowering or cloying. Smell the raspberry wafting off it. Pleasantly surprised with this one.

Tasting notes: A bit dull and flat. Bitter. In some ways perhaps a good English bitter but I may be serving it too cold, honestly. Not bad but a bit underwhelming.

My favorites of 2016, in no particular order, were the Kolsch, the Raspberry Wheat, the Oktoberfest, the Chocolate Milk Stout and the Saison de Noel.

For the new year, my goal is to continue to brew, albeit at a less breakneck pace. It's great to have fresh, homemade beer on tap year-round. If I can make seven to nine batches in 2017, I'll be more than happy.

Rest assured, I'll let you know how it goes. Until then, happy New Year and sláinte.

The last mile of the marathon

On a cold and rainy late December morning, I brewed my 12th and final batch of beer for 2016. This recipe comes from Tallgrass Brewing in Manhattan, Kan. via Northern Brewer. This sweet, milk stout, Tallgrass' Buffalo Sweat, will be a nice treat for our St. Patrick's Day celebration in March.

Finally putting my own plate chiller to work

More than six months ago, my brother-in-law introduced me to the wonders of the plate chiller. It took me a while to purchase and assemble all the pieces, but I'm happy to report that I've finally got my own setup.

In this photo, you can see all of the essential pieces before assembly: 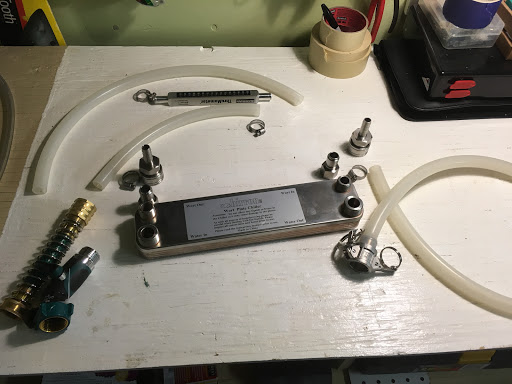 And here she is in action, chilling my latest brew, a La Petite Orange Belgian dubbel, to pitching temperature in just a few minutes. It easily saved me 30-45 minutes at the end of my brew day. 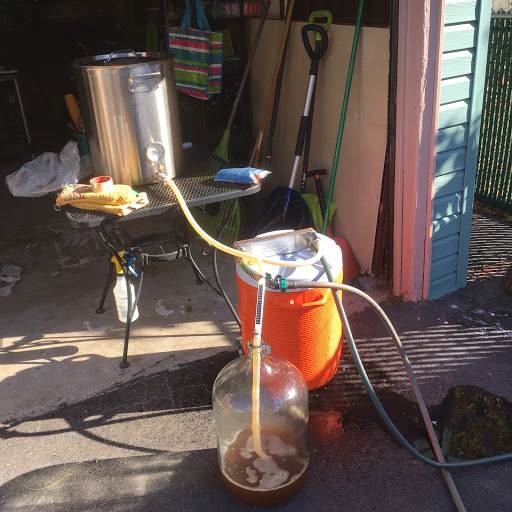 In case you want a close-up of the Thrumometer in action, here it is, nailing the pitching temperature of the wort to a perfect 72° F, just like the Trappist Style High Gravity yeast likes it. 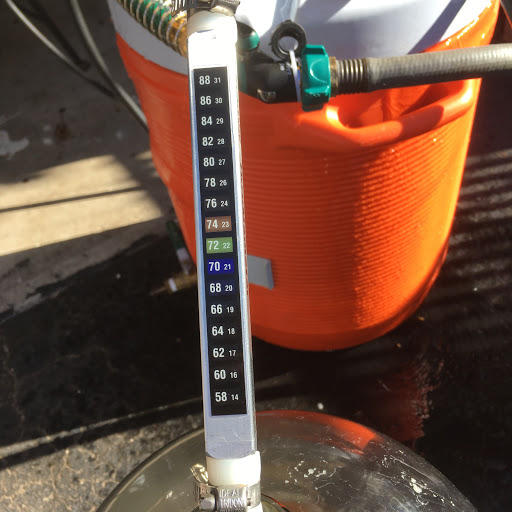 Now that I've got my own plate chiller, I can't imagine going back to an immersion chiller, particularly on those hot summer brew days. Luckily, with this new setup, I won't have to.